Back at the van, Ryuuji fumbled with the keys as he hurriedly tried to make his escape. Unlike Flugel, he had no trump card. It was all nerves and adrenaline--no magic bullets. Heart pounding, the engine came to life.
The van was cold. So cold that his sweat felt like morning dew as it made its way down his face. Of course, the summertime was hot, but there was a limit to air conditioning--no need for a van to be this cold. The stench was thicker now, stronger, and Ryuuji felt a vague need to vomit.
He drove to the far end of town, out of the reaches of the Digital Zone, an empty lot yet to be developed. His mind was racing as the car sped through the town, as if on auto pilot, desperately trying to find an exit from the labyrinth he had found himself in.
There is no end to it. There is no end to it. There is no end to it.
The words kept echoing in Ryuuji's head.
Durga Fida Sharma.
There is no end to it.
Mother.
There is no end to it.
A sanctuary.
There is no end to it.
Mama.
There is no end to it.
Ryuuji vomited. The van smelled, it smelled horrible, awful, and the vomit seeped into his shoes. A ringing noise in his ears. There was no sound to it.
The car came to a halt as if he had found himself at the end of a dream. There in the lot was Ryuuji’s Celica, inexplicably placed from the hospital garage. The Celica was staring back at him, beckoning him to return to the vehicle. As he stepped out of the van his sweat felt even colder in the early morning air. He threw the P-COM in the glove compartment of the Celica and stepped in the driver's seat, where he stared back at the van. He thought he saw himself for a moment in the driver's seat, staring back at him.
It’s said that human beings feel great fear when making decisions that are likely to bring them great happiness. This was that kind of situation, in its own rite. What was inside this van had the potential to bring him great happiness--eventually. Yet he knew until that happiness, there would be insurmountable hardship. The phantom of himself stared back from the driver’s seat with an inexplicably affected look in his eyes.
He got up and approached the doors of the van.
He knew the contents of the truck from the moment he stepped foot in it, but it was something he didn't want to accept. It was far crueler, far more sinister, and far more efficient than what had happened to Kaya.
He thought about driving off and leaving the van there, but he knew he couldn't abandon his mission like that. There would be no end to it.
Ryuuji stepped out of the Celica, its headlights left on like a nightlight to ward off the fear of the dark.
He approached the backdoors of the van, and slowly took the keys out of his pocket. The doors opened, and the peculiar smell that had been present in the vehicle was completely apparent now. The heavy scent of iron dried out the ice cool air, stinging his nose as he breathed it in.
Various freezers were stacked on top of each other, and a dim light turned on at the roof of the van to highlight the large number that remained in the back. A sticker with an order number was tacked on each box. A singular crate stood before him, separate from the rest. 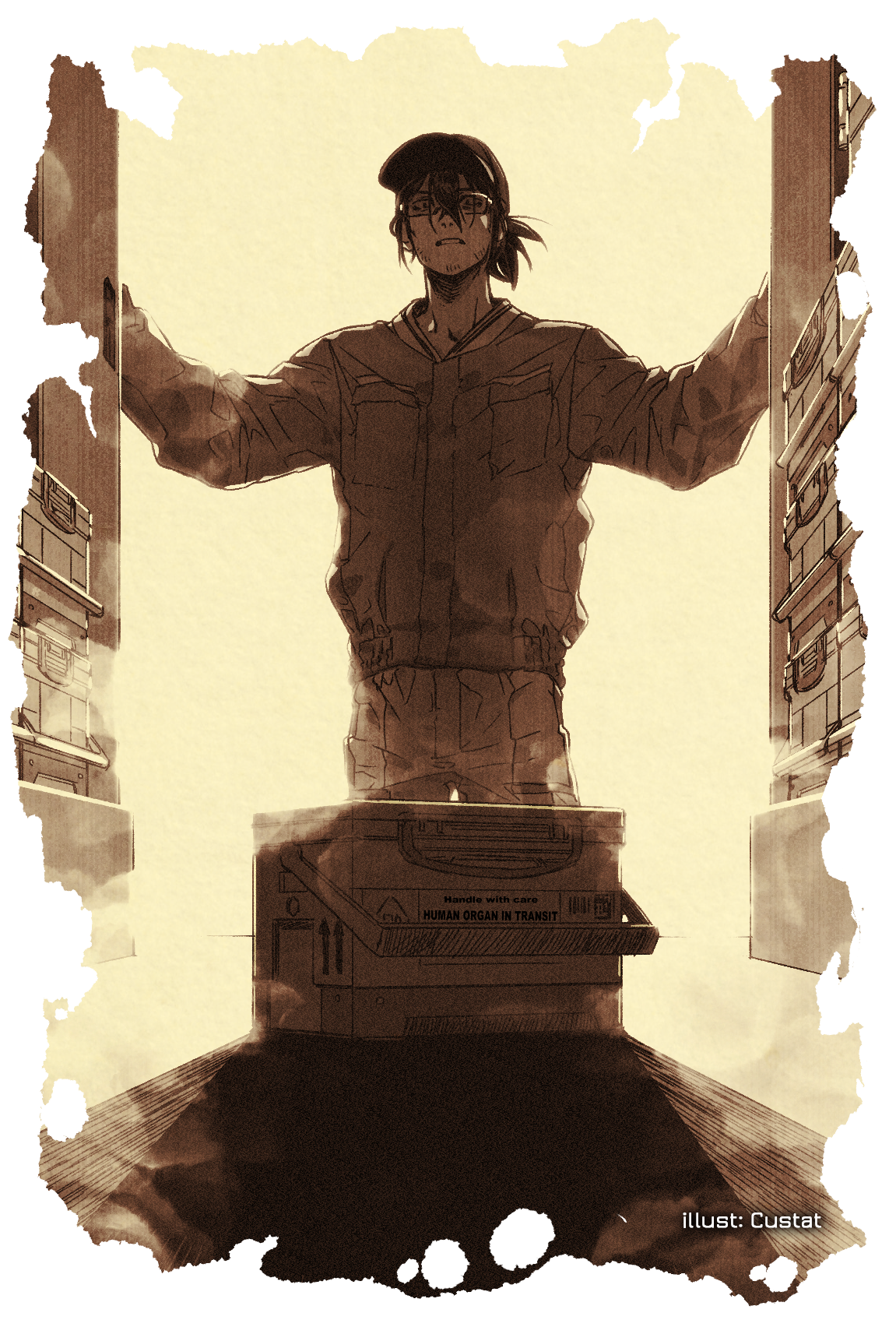 He clicked open the lock, and nitrogen escaped from the crack. Ryuuji stood frozen solid in the still twilight as the setting sun made its way over the mountains. The ocean waves were the only thing he could hear as he stared at the contents of the box in front of him.
A human brain.