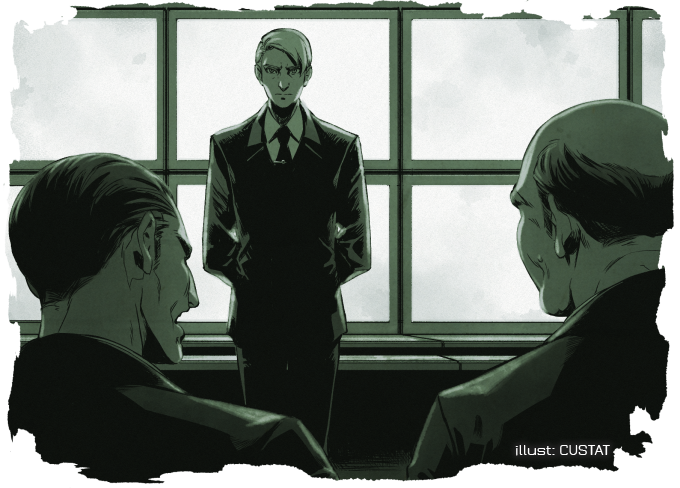 “At approximately 0500 hours an unidentified hacker staged a DDoS attack on CyberConnect Corporation’s main server by way of a third party connection. No one was severely affected. The hacker’s location has been ascertained; local authorities are on their way.” David listed off the facts. There wasn’t much to be said, after all—he knew about as much as they did. He might as well have described the screens behind them.
“They” were David’s superiors. They sat before the screens in an impromptu interrogative position. The meeting was being held in the Japanese NAB’s monitoring command room. It was more or less organized the same way as its American counterpart—the only major differences being the general cleanliness and brand of the monitors. Regardless of nationality, nothing good happens in these rooms. It is a place of surveillance—this is where words like “justice” don’t exist.
David stood before the array of screens in the NAB’s monitoring command room. Each screen was filled with different images and video clips that repeated the same moments over and over again. Virtual photographs of Flugel, of the rats, a clip of Drain unleashing his final attack cut off by static, over and over…
“Where did that discharge come from?”
“No one’s been able to track it down yet.”
“Impossible.”
“How could such a huge attack take place with an unknown origin point?”
“Perhaps they used drone machines?”
“Of that size?”
“There’s no way.”
“Then what are we to think?”
“There are logs and records.”
“And clearly they have done us no good.”
“Then this hacker… how did he stage such an attack?"
They rattled on. It seemed that everyone in the room was avoiding talking about one subject in particular. The one thing that would explain all the “impossibilities” and “errors” of this case was patently absent from the small talk being made by these old men. No one would dare discuss it, either—to do so would invite a sordid history of suffering and misuse of power into the room. David, however, was not one to care much about such sensibilities. Finer feelings like that were distinctly Japanese, and David was American.
“There is one possibility.” David said this clearly, and what would come next was palpable in the room. Ishizuka, the leftmost NAB official, was visibly becoming nervous. David looked on, waiting for his next cue to speak.
“Was there something else you observed, Steinberg?” he asked.
“I had been monitoring the quantum computer in San Diego during the attack.” A new silence permeated the room. Ishizuka turned to the others, and then spoke up.
“And?”
"At around 5pm it recorded a huge surge in processing, sir.”
“Preposterous!”
“The criminal use of quantum computers should be virtually impossible!”
“This is last year’s news!”
“If this is the case, then…"
"If I may, sir--if you'll note the rats on the screen here--these things were produced by the processing power of the quantum computer. This much can be confirmed by simply their visual appearance. Compare the appearance of these rats here to the raid monsters from the last recorded instance of a quantum computer's use last Christmas, and you'll notice that they both feature this distinct violet hexagonal pattern. This could be considered the hallmark of a quantum-enhanced virus."
"Like I said, Mr. Steinberg, that's impossible."
"And I'm telling you, it happened."
There was a silence in the room for a moment. It was indeed true that the criminal use of quantum computing should have been “virtually” impossible. This was something that was achieved by Reiko Saeki, another employee of NAB. David had spoken to her recently to retrieve her report on the matter.    Ishizuka looked on at the rats. “And you’re certain of this?”
“Positive.”
“I suppose in a seemingly impossible situation all possibilities must be looked into, no matter how absurd.”
“The absurdity of the case is simply due to its relative unfamiliarity to the NAB. The only other modern use of a quantum computer was just last Christmas, if you’ll recall. These sorts of issues will only become more common as quantum computing is developed further—that’s why it’s imperative that we set protocols for these ‘quantum crimes’ before they can reach even larger scales. The hacker’s work you see on these screens would’ve been catastrophic, and we only missed it by the hair on our heads.”
Whispering. Ishizuka leans over to his colleague and says something into his ear. The colleague nods, gets up, and leaves the room. David judges it to be a display of inscrutability—a tactic common in organizations like the NAB as an advanced form of exclusivity. Even if it hadn’t, something seemed to have been set in motion that was beyond David’s control.
"If that's the case, then you'll need to investigate internally. Meet with the officer who reported on this matter. After that, you'll have to go back to America and examine the computer for misuse yourself. Dismissed."
"Understood."