A monster who lurks at the ceiling of the world. A basilisk of immense power slithers down from the stratums that do not spin, that do not turn. The basilisk is benevolent, and provides. We need so many things to keep our lives going, and so it lulls us into a waking slumber. Empty images of the future placate the present and questions leave us. The warmth of the slithering snake wraps itself around us like a mother’s embrace, and we feel at peace, satiated, absolute oneness. All desires escape us. Then the basilisk tightens its grasp an inch and dissolves our body into itself, our life escaping the bones, but we don’t care, we don’t care, we don’t care--the images are eternal, and we are asleep. The snakes continue to spin the world round and round.
The world turns, and the snakes smile kindly to some. Ms. Bain is known by all laymen. Her achievements as CEO lined a career that propelled itself only upwards, creating an arc around the planet, and she quickly became a defining figure of the 21st century. Of course the leagues of power stretched far above her, but the faces and names of those that occupied those positions would be unknown even to Veronica Bain, let alone the everyman.
Reiko was sitting in a meeting room deep in the San Diego branch's main building. The windows let in a healthy amount of sunlight that illuminated the table in front of her. Clearly this was not Veronica's office, and more of a general meeting room reserved for any and all purposes. A ticking clock painstakingly counted down each second, and Reiko thought of Veronica's immovable schedule that Mr. Ogura had briefly mentioned. And, as soon as the second hand signified 2:30pm, the door opened and revealed Veronica Bain.
Reiko stood up, as if a commanding officer had entered the room. She was stiff and immobile, to which Veronica couldn't help but laugh.
"Sit down, sit down. There's no need to be so formal."
"Right..." Reiko took her seat and looked at the woman of legend in front of her. Bain wore a royal purple pantsuit that accentuated her features. It was clear that she had lived a long time, but she possessed a worn youthfulness that seemed retained by sheer willpower alone. Subtle touches of makeup enhanced it but did not hide her age either--just enough wrinkles to exude experience and authority. Her blonde hair glistened in the sunlight, and Reiko finally found herself looking straight into her eyes, and her gaze was unbroken. The way Veronica looked at her was with an intensity that seemed to mask any emotion. Whatever was going on behind that stare was unreadable to anyone, and Reiko found herself looking away out of fear without thinking. This was the mastery of body language only those as close to the top as Veronica Bain possessed.
"Ms. Reiko Saeki, is it? I've heard about you. A former employee who moved on to the Network Analysis Bureau in 2017. After reviewing your tenure here at CC Corp, I must say I'm sad that the executives at the Japan branch didn't try harder to stop you when you left."
"Yes, they didn't put up much of a fight. It was almost disappointing." Reiko said this as if to riff, but felt ingenuine trying to reach Veronica's level.
Veronica smiled and lit her pipe, taking a long drag. "Well, if you were to submit your resume again, maybe I'd take a look over it personally..." The smoke filled the room quickly and diluted the sunlight. "But, let's move on, shall we?" And then the conversation switched gears as Veronica commanded it.
"Yes... I'm sure you know why I'm here."
"Your investigation into the alleged unethical use of a quantum computer, no?"
"Yes. We have reason to believe that a certain program was employed by the quantum computer being housed here in San Diego."
"A certain program, you say? You mean the Digital Bastille?"
Reiko was taken aback by how openly she had admitted to the existence of the electronic prison, a terrifying software made to torture prisoners from the very basis of their consciousness.
"So you admit to its existence?"
"I'm not admitting anything. I'm just going by your allegation."
"But I haven't said anything about such a program yet."
"I know."
"Then how can you deny it?"
"Because we're talking about a program that doesn't exist."
"What?" 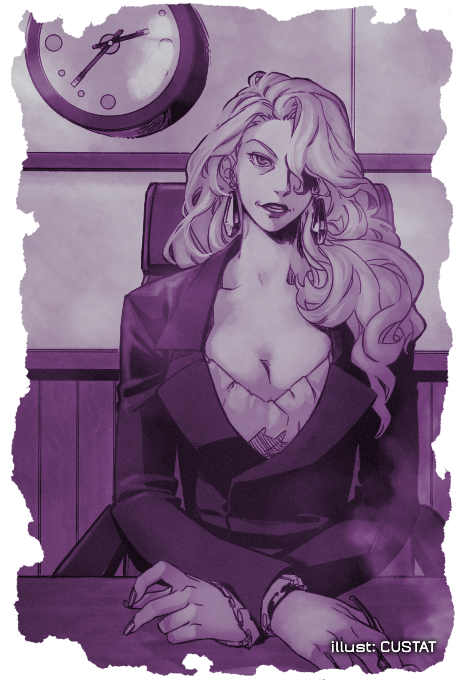 Again the mood had changed. Reiko could not read her at all.
"Mr. Ogura will show you where we house the computer, and you will find no evidence there."
Reiko reached into her jacket to fumble for her tape recorder, but found that Mr. Ogura had picked it off her before she had entered the room. It was Veronica's intention from the start, it seemed, to lay all her cards on the table.
"I like you, Ms. Saeki. I think you are a very interesting person, and I think you know the difference between right and wrong. Do you understand what I mean?"
"I'm not sure I follow," said Reiko with a wavering voice. While it was not unusual for her to be prone to emotional responses, she had felt as the years had gone on she'd moved beyond simple things like fear. But here, in front of this monstrous woman, she felt true fear.
"What I am saying, Ms. Saeki, is that we are alike. You have a keen sense of what you want. This is a quality that is rare in the spheres we occupy. There are too many people in this world who work like racehorses for suits in VIP boxes placing bets, and the higher you go the truer this is. To have conviction, to firmly believe in something that can be traced to the values that make up the person that is 'Reiko Saeki,' is a trait very few possess."
Reiko swallowed her fear, and spoke up: "Then, what are you? A racehorse? Or a suit?"
"I am God," said Veronica Bain. The room changed again, this time the walls seemingly collapsing to expand the space beyond knowable limits, and they were alone here. The sun had disappeared, but Veronica seemed to glow enough to fill the room. "I know everything about you, Ms. Saeki. In 2016 you began working at CC Corp under Project G.U., and then in 2018 you became part of the NAB. In that time you briefly began to see a man romantically, but ended it in fear of becoming distracted from your work. Currently you are in search of Masato Indou, the man held responsible for the Third Network Crisis and another man, too: Jun Bansyoya, your brother. And now you are here."
The sun filled the room again as Veronica let Reiko return to her senses, taking a drag from her pipe. Her brother's name was like a spell that returned her to reality. She collected herself in her seat and took a deep breath. Finally, she spoke. "There's no reason you should be telling me things like this. If we're negotiating here, then let's just name terms and be on our way. You're a busy woman, and so am I--let's not mince words." The attempt at commanding the conversation put a big smile on Veronica's face.
"You are so interesting, you know that? You remind me of myself at your age. You're right--let's not mince words. I will tell you exactly what will happen from here." She took another puff of the pipe. "I will leave this room, and then Mr. Ogura will take you to the quantum computer. You will discover that our quantum computer was being misused for criminal intent--a hacker. You will implicate that a third party utilized an unauthorized tool to take control of our computer and misused it for criminal purposes. You will do a thorough investigation of the premises and find no traces of collusion, and you will leave the case open. Then you will return to Japan and apologize to Mr. Tanigami for taking up his time and inform him that the incident, as far as the PFW is concerned, is closed. You will submit a report like this to the NAB--"
"What am I lying for? What could you possibly have over me?" Reiko cut her off. This was not on Veronica Bain's schedule.
"You will submit a report like this to the NAB," she said, slower this time as if to assert it, and then continuing where she left off, "and on confirmation of this report you will receive a phone call." She took another drag to let Reiko review the steps. "You will learn the truth about your brother, Jun Bansyoya."
There was the magic spell again. Whatever facade of power Reiko had put up crumbled under it like a house of cards. It was the key to her heart. Even if she didn't know it, that name allowed Veronica Bain to ask anything she pleased of Reiko. Everything that followed this moment was the result of it, too. The basilisk sheds its skin and emerges stronger than before. Her careful words slither around Reiko and tighten their grip.
The snakes spin the world round and round.