Time for work.
This was the sole thought in Ryuuji Sogabe’s mind as he walked out of the Baketon Hotel.
Lillie.
This was the second thought that shot through Ryuuji’s brain at a thousand kilometres an hour. There were various preparations to be made, but the most urgent was taking care of what was to be done with Lillie. His thoughts raced at the various possibilities. He flipped through his P-COM as if he had suddenly forgotten the names of those closest to him, those who he could trust to handle the most precious person in his life.
There weren’t many names registered to the device. Among endless informants, hackers, and other work-related contacts, few truly “personal” entries remained. The first of which was Kuryu, Tokio, age 17. While a closely trusted confidant who Ryuuji was sure would make it his single goal in life to take care of Lillie, it just wouldn’t be fair to a boy his age to be stuck babysitting and otherwise parenting what was essentially a child. Unbeknownst to Ryuuji, however, Lillie herself had approached a certain age where Tokio’s quickly maturing self would be impossible to ignore. It was a recipe for disaster, of course. There was the balancing factor of Saika Amagi, but it would be nothing more than children playing house.
Steinberg, David. An investigator with the NAB. A man on his way out of Japan. No doubt a man of upstanding morals and virtue, but not the kind that aided in the care of a young girl. Ryuuji knew, too, that David had his own prerogatives. The matters they had just experienced were fresh in his mind, too, and no doubt it was all the same the beginning of a long journey for his close compatriot. David simply wouldn’t do. Though, perhaps it wouldn’t look so strange for a blonde white man to be taking care of a blonde white girl.
Nomura, Kaname. Also known as Metronom. Formerly Ryuuji’s second-in-command during their days as Schicksal, now the CEO of a company specializing in cutting-edge medical technology. There was no way this up and coming medical mogul would have time to take care of a little girl. Resources plenty, but you can’t cultivate growth without a bit of familiarity. Also: young. Too young.
Finally, Ryuuji’s finger rested on one particular name. Saeki, Reiko. A headstrong woman who was currently an investigator for the Japanese branch of the NAB. Work was plenty, but pedestrian. Having a strong female figure in the home wouldn’t be bad for Lillie, either. There were plenty of reasons for Ryuuji to contact her for the job, but the one thing holding him back was their general unfamiliarity with each other. Or, rather, the one-sided relationship. It was true that they knew each other, but Ryuuji knew her far better than she knew him. During his time in the Akashic Record, Ryuuji had become quite acquainted with the dubious Twilight Knight of Pi, Reiko’s character in The World. But that was an AI, and this was the real deal--someone Ryuuji had only met in person once following the events of Immortal Dusk, an investigator on the case. Nevertheless, time was of the essence. To halt everything and search for a caretaker whilst a perfectly viable option was here before him would be ridiculous--there was no amount of Japanese social faux pas that could halt his inquiry. Thus, Ryuuji began to tap away...
Dear Reiko Saeki,

My name is Ryuuji Sogabe.

June 16th 2023 was the last time Lillie saw Sogabe. He had dropped her off for school and was not home when she returned. Saeki made her first appearance three days later.
“Hi. Are you Lillie?” She asked this in the same voice with which she spoke to her cats. Not baby-like, but with a softness that was rare for Saeki. She didn’t know it, but this was a great privilege for Lillie.
“Yes,” Lillie had apprehensively replied through the crack in the door. Saeki was about a head taller than her, and only half her expression made it through the opening. While her voice may have been kind, her appearance was still that of a businesswoman. To see Saeki out of her pantsuit was an even rarer appearance. Even the brief, fleeting man she nearly called a ‘boyfriend’ had never seen her out of business attire.
Saeki flashed her NAB badge. It made no difference to Lillie, who was more or less a child. To her, this only evoked scenes out of films where out-of-uniform police psychologists came to the doorstep of a child to “interview” them, when in reality they were looking for a statement. This obviously wasn’t what Saeki was there for, but she might as well have been Jodie Foster.
“I’m not here on official business or anything. I’m only showing you this so you can trust me. I was sent by Sogabe.” If Saeki was telling the truth, Lillie thought, then Sogabe must be in trouble. She let her in.
The interior of their apartment was nothing special. Sogabe kept a solitary replica of Rockwell’s Boy Reading Adventure Story on the wall. Beyond that were walls of bookcases and file cabinets. Despite his work being mainly digital, physical records were necessary for observational records, which could be most clearly compared to graphs made by machines monitoring tectonic plates--it was important to keep records of spikes in network activity during unusual events. In any case, it had no signs that a teenage girl lived in it, let alone a human. It was like the interior of a computer.
In fact, the only signs of Lillie were her entrance exam study guides. Saeki took note of this and commented, “How nostalgic. Are you nervous?”
“No,” Lillie responded curtly, forcing herself to be short like an adult. She made tea in an effort to put off dealing with the stranger sitting on Sogabe’s couch.
“So this is where Sogabe lives…” said Saeki quietly to herself. At this point in time, Sogabe was someone Saeki had met once, after the events of Immortal Dusk. He didn’t leave a good impression on her, but that was irrelevant--she couldn’t just ignore a small girl in need.
Sogabe, too, did not know anyone more suited for taking care of Lillie. He could never trust another man to look after Lillie, because he didn’t even trust himself in that regard—Lillie mostly took care of herself.
She took the seat in front of Saeki and sipped her tea. It was hot enough that she winced in pain but tried to hide it, and Saeki pretended not to notice. Voice shaking, she said, “So, is he dead?”
“Good grief, no.”
“Then why are you here?”
“To tell you the truth I’m not quite sure myself. I was just told to bring you an allowance from a special bank account and provide you with basic necessities. I wouldn’t mind keeping you company either.” This was not an embellishment to make a little girl feel good. Saeki really did need the human contact. Cats, after all, are incapable of verbal sympathy.
“How do I know you’re not, like, a serial killer?”
“Do I look like a serial killer?”
Lillie didn’t answer that.
“In any case,” Saeki continued, “that’s how it is. We don’t have to talk about anything either, if that’s what you want. I just can’t let you stay here alone.”
Lillie, in the end, was a child. She longed for the security of adults, and welcomed Saeki into her life. That was how their friendship began.

Ryuuji was now sitting alone at Johnathon’s, a chain of family restaurants. Before him was a solitary plate of spaghetti and a small glass of bright green melon soda.
It was the complete opposite of the Baketon Hotel, to say the least.
The analog fortress was Ms. Veronica Bain’s stronghold. In there she would remain untouched by cyber attacks of any caliber—this was a battle strategy Ryuuji decided he too must adopt. Veronica Bain, of course, sat at the top of the consumer electronics chain. The CyberConnect Corporation in conjunction with ALTIMIT possessed a large hold on the market, and Ryuuji’s devices were no exception. To disappear from Bain’s game board, he had to eliminate everything that marked the name Ryuuji Sogabe; he had to commit a sort of virtual death.
There were currently two markers on Ryuuji Sogabe—the first was his smartphone, a new model put out by ALGOS the year prior. The second was his P-COM, a portable computer carried for his work. With ease, any technologically sound organization would be able to track down the exact whereabouts of the entity known as Ryuuji Sogabe through any kind of digital footprint by these devices. They were to be destroyed. Ryuuji held no personal attachments to these devices. The contents were safely stored in his own personal cloud, and his work provided him connections to let him attain the newest models earlier and cheaper than the average consumer.
Once the tech was dealt with the next in line would be to retrieve as much cash as possible.
After that—transportation. A car.
He took a deep breath.
ALTIMIT, the company which Veronica Bain worked at before founding CyberConnect, had developed a quantum computer. They had discovered a way to power this quantum computer with the human brain—the bio-element, as it was called in their design documents. ALTIMIT had crafted various ways to get a hold of this bio-element, chief of which was the development of an online game called fragment, tangentially connected to the quantum computer. Kaya had played this game with her father, who fell ill to the adverse effects of the mental link between the game and the computer, which took huge strain on his consciousness. It would haunt him in his dreams, and would later haunt Kaya, too. Ryuuji now faced the insurmountable task of proving the relationship between ALTIMIT, Veronica Bain, and the unethical development of the quantum computer. In addition, he had to find and stop the additional channel of bio-elements, wherever they were coming from. An international issue, and Ryuuji was just one man on the island nation of Japan.
All tasks accounted for, Ryuuji finally felt the full weight of his current life. He had made an enemy of the world—CyberConnect and ALTIMIT. These two bulwarks of technology controlled the Net. The unseen world of computers lived and died by their network protocols and myriad programs. Of course, competitors existed—various underground developers, too, but all functions according to the ALTIMIT script. 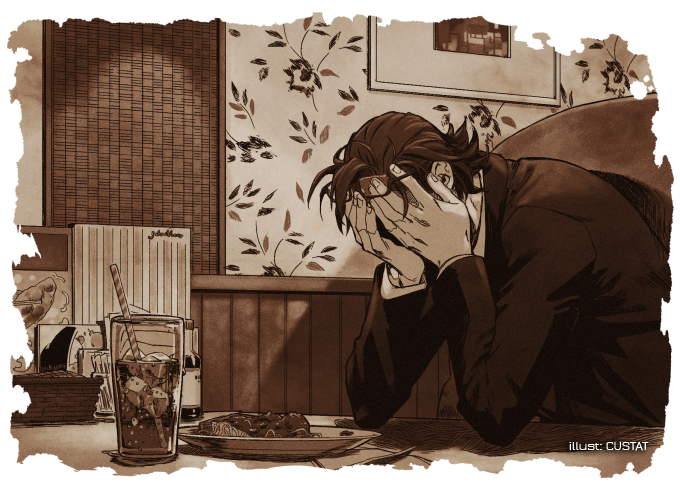 Ryuuji cradled his face in his hands and let the moment pass. He counted to five as the moment itself expanded in all directions away from him, casting off into the void where it was caught by electrical signal and scattered into the resonance of the earth.
3...
2...
1...
Time for work.