"Anyway, I'll see you girls later."
The video feed cut out.
Reiko had just moved in to her new Tokyo apartment as part of her relocation to NAB's main branch. The small window she had spent in her hometown of Nagoya after 2020 had just shut, and naturally she found herself on the express train bound for Tokyo once again.
It was the end of the year 2022, immediately following the Bloody Christmas incident. Reiko was on her way to Aomori at the northern tip of Honshu, where the girls she had quickly come to like had invited her to their hot springs. Just as abruptly as she had moved to Tokyo she found herself leaving it.
There was more than one reason that Reiko was on her way to Aomori, however. The hot springs were just an added bonus--her main objective was the headquarters of the research institute known as Psychopathology und das Forschungsinstitut der virtuellen Wirklichkeit, or PFW for short. It was this PFW that was responsible for the development of the quantum computer as it was known today, continuing the research begun by Paul Benioff some years ago.
PFW was originally founded by Ryuji Sogabe, a rare breed of psychologist programmer, as a subsidiary of the CyberConnect Corporation. The initial purpose of the institution was to conduct research on merging psychotherapy methods with technology in order to treat patients more effectively and efficiently--it sounded like borderline science fiction, but this was true of all good ideas in history. After Sogabe's departure sometime in 2022, PFW underwent a complete overhaul and turned into a major research facility for CyberConnect. As both a NAB investigator and former CyberConnect employee, this was the context with which Reiko made her visit.
Reiko disembarked the train and stopped by a food stand on the platform. She ordered a pork cutlet sandwich, and the machinery within the stand began its record-time process of assembling and heating the ingredients. The taste was immaculate. This was one of the many luxuries afforded to Aomori prefecture, the world's first Digital Zone.
As Reiko stepped onto the street the various technologies that resulted from unlimited government funding and unbridled scientific exploration in PFW laboratories made themselves clear with their abundancy. The ground beneath her feet, for example, was devoid of snow--a heated wiring system ran through the concrete, keeping it at a temperature too warm for snow to keep: the Gaia Snow-Melting System. Up above, streetlights had holographic displays that read "WALK" and "STOP" in every relevant language (that is: Japanese, English, Korean, and Chinese, even though the diagrams of a man walking and standing transcended all language). The crosswalk lit up when it was the pedestrian's turn to cross, and Reiko walked along the zenith of science fiction turned reality.
It was still early afternoon and Reiko had time before she was to go to the hot springs. The invitation was extended to her by Iori Ikuta, the player behind Tobias in The World R:X. It was only such a short time ago, yet Reiko felt as if that memory was from another life. Tobias, the dashing white-haired Blademaster known for breaking girls hearts, was the persona of the tall but plain Iori that had entered her office some time ago with Asumi Aida, the player of Sakuya. Both were fresh-faced and youthful, with their skin glowing the way only those who live up north in the snow could. Their carefree attitudes were intoxicating, and she was excited to share that space of teenage nonchalance with them again.
Reiko ducked into a cafe to kill some time. Earthy, dark, with a persistent scent of wood. She took a seat by the window and ordered a cafe au lait. The manager, a well-groomed older gentlemen, took note of her duffelbag and struck up some conversation.
"A tourist? Are you from Tokyo?"
"Yes, but I'm here on business."
And she was. The fact that her lodgings were at a hot spring were besides the point.
"Aomori is a nice place. Even if it's for business, I hope you enjoy yourself. Here, on me." The manager placed a slice of cake down in front of her. She smiled and thanked him, and he went back to his post, aimlessly cleaning plates. The sweetness of the cake and the coffee lended to each other seamlessly, and Reiko almost forgot what she had come for. As if to remind herself, she pulled her laptop out of the bag and read the e-mail that had dragged her to Aomori.

We would be pleased to give you a tour of our facilities. However, I will be out of the country until the end of the year. Would you mind waiting until then? I'd much prefer to show you around myself.

Thanks for your understanding,
Hitoshi Tanigami
Chief Executive Officer 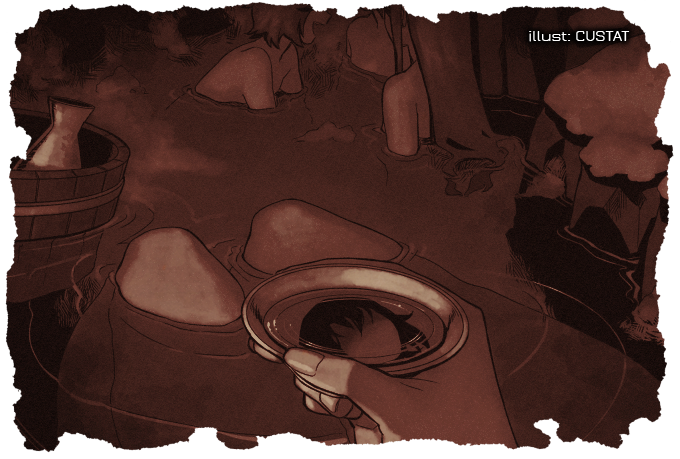 Reiko soaked in the outdoor bath of the Ikuta hot springs. The cold winter air contrasted comfortably with the soothing warm embrace of the water--a perfect equilibrium. She sipped on her locally brewed sake and entered a relaxed state inside and out, her senses floating across the water.
The girls chattered on next to her.
These three girls were the main subjects of the Bloody Christmas incident: Asumi Aida, Iori Ikuta, and Eri Etou. All three were Aomori locals, mostly normal girls who just happened to become mixed up in this mess. It seemed like they hardly took what had happened seriously at all, the way they naturally riffed off each other. Reiko looked on silently, thinking of herself at that age--she certainly didn't speak as freely.
"You know, Asumi, I'll be meeting his father tomorrow."
"Who's father?"
"Hermit's."
Asumi was taken aback. "Huh?! You mean his dad's here? In Aomori?"
"That's right."
"No way... Hermit's dad..."
"He's the CEO of the big lab around Asamushi," to which Asumi's eyes lit up.
"You mean that huge building with no windows? He runs that place?!"
"Yup."
"Whoa!! I had no idea Hermit's dad was such a big deal..." Asumi's eyes were practically glowing. The world of adults was still unknown to her, and she could only picture it in fantasy.
"That lab's responsible for all the Digital Zone technologies here in Aomori, right?" asked Eri.
"Yes, they've been developing it all through ALTIMIT."
"Can you tell them to develop something actually useful?"
Suddenly Asumi broke out of her fantasy. "Wait, what're you meeting Hermit's dad for?"
"Well... I doubt it, but there's a possibility he's at least involved with that puppetmaster I mentioned."
"Is Hermit's dad a bad guy?!"
"Not quite. But he might be working for bad guys without even knowing it."
Asumi laid back against the rocks. Her mind was racing with dramatic scenes of corporate espionage.
"They developed that Digital Bastille technology I mentioned over the phone, and they've been advancing research in Soul Digitalization, too. And because Hermit was Soul Digitalized on the same server..." Reiko paused and look deep into her cup, and then past it deeper and deeper into the void. This void lingered heavy over her heart. It was an unknowable presence, something that had settled deep inside her even before she had begun working at the NAB.
Call it intuition or any other such paranormal term, but Reiko had a sixth sense. This was her sense of right and wrong. Since she began working at CyberConnect, she had felt something deeply wrong. The messages her brother had left her, the mysterious Bansyoya Files; she felt as if her brother had kept trying to tell her something, but couldn't find the words to properly express it. When the Third Network Crisis had run its course, or when Immortal Dusk passed on without incident, any time she felt she should be celebrating a victory a sinister feeling passed over her. Somehow, she felt, something was going wrong.
The truth and facts had become misaligned. At the resolve of any major incident surrounding The World, the news reports never quite matched the realities she experienced. Of course, there's a certain level of secrecy when dealing with matters of insider corporate information, but the way with which the cover stories bent and twisted into recognizable mixtures of lies and half-truths went beyond regular omissions. The CyberConnect Corporation had been through one too many incidents to operate as smoothly as it did, and shielded from government eyes no less.
And now, Bloody Christmas. Here she sat, gaily sipping away at an entire half litre of sake just for herself, and three obliviously happy teenaged girls enjoying their youth next to her. In the pit of her stomach, she felt her work wasn't over. It was a feeling that was all too familiar. CyberConnect had just dealt with the leak of not just customers' financial data, but their most private health records. How was it that the Japanese government hadn't shut them down on principle alone? Reiko went over the info in her head, but it didn't add up--could it be something as simple as the exchange of money?
"Are you okay, Ms. Saeki?"
Reiko returned to reality. "Oh, sorry. I zoned out for a bit there. By the way, just Reiko is fine. No need to be so formal among girls, you know?"