David was very conscious of the bubble that had formed around him. More precisely, he now sat in a packed lecture hall surrounded by a circle of empty seats at a radius of 2 seats. It wasn't unusual--this was the first class of David's spring semester, and he was by now quite used to the "gaijin bubble" that came to define the seating experience at Osaka National University. David was mostly serviceable in Japanese, able to understand the conversations around him and voice some of his thoughts with ease.
It had been a few months since his arrival last September, so there wasn't so much of a disconnect anymore: any remarks about his appearance or general foreign presence didn't really bother him anymore, but that was just a mantra he told himself.
The class that marked his first day was some sort of criminology course, vague by definition and light on coursework--a sort of humanities-influenced class that didn't really get down to the subject of the matter but instead talked around it. Then again, most classes in Japan, even mathematics, were somehow humanities-leaning.
Trying to forget about how visible he was, David prepared his notebook. As he placed it on the desk, the door of the lecture hall burst open and a girl ran through, loudly making herself apparent, then running up, up, and right next to David, where she situated herself as his neighbour. Panting, she unloaded her backpack, and began to set up shop while the professor was calling out attendance.
"Fujioka?"
"Here!" she said, catching her breath.
Just as theatrically as she made her entrance, the class continued to be full of episodes. David would steal glances at the girl next to him as she would make a scene out of trying to find a pen, then oscillating between intensely furious note-taking to staring off into some other world. By the time the bell rang, David realized he had not taken any notes, completely captured by whatever minute drama she had cooked up.
As he was cleaning up, he suddenly couldn't breath.
The girl had grabbed his nose. 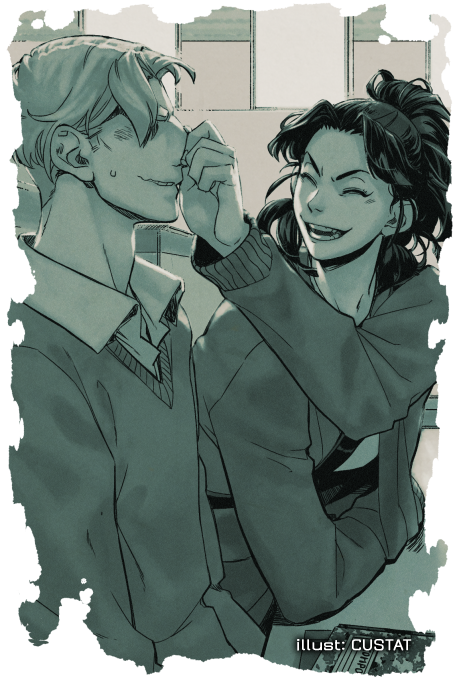 "Um," he said. She started to laugh.
"My bad, my bad. I just couldn't help it! Your nose is huge!" It came from a good place.
"Thanks..." there was a pause. "Can you let go now?"
"Oh, I'm sorry."
"Do you grab the noses of every foreigner you meet?"
"You're the first. I've just never seen one in person before! Or, more like I've never been so close to one before."
"But your English--it's great."
"I've just spent a lot of time online. Pretty kokusaiteki, huh?" She flashed a smile.
David was not used to such direct attention. Most Japanese nationals that interacted with him did so by talking around him, asking questions they weren't really interested in, using courtesies and phrases they wouldn't even use with another Japanese stranger. This girl had bridged the gap between them by force. He wasn't used to such tactlessness in a country so literate in the art of tactfulness, but she paid it no mind.
"I'm Eriko. Yoroshiku."
"David."