Thousands of images came hurdling at her at once. The beginning of her life. Throes of passion between lovers. The indiscriminate deaths of others. The monsters that lurk under your bed, in your closet, in your head. The world's images all gathered here. She was freefalling, free floating, and then an apparition appeared.
It's hard to repeat what exactly it was. It stared straight into her eyes, but straight past her too.
Her eyes--it felt like her eyes, but her entire concept of self was scrambled here. Names, thoughts, sounds, identity--it was laid bare for the apparition to see. It was screaming, screaming, screaming, and then suddenly silence. There was no sound to it.
The body's caretaker had disconnected her from the terminal.
"What was that thing?" asked the visitor.
"What you experienced is what she experiences in a state of constant flux. This is her true nature. This is what's left," said the caretaker.
"What's left? What's happened to her?"
"Her mind has become irretrievably lost."
"Irretrievably lost?"
"That is to say, it is irreparable. Out of commission. It is now a pure form, something beyond a mind. It exists only in there. This body, too, is only a formality."
The caretaker explains as he prepares tea. The visitor sits on the floor, just now regaining her senses. Thumb, index, middle, ring, pinky... the very extensions of her body had suddenly become foreign to her. The readjustment period is long, but she will return to her regular self in a short time.
The tea is offered to her, and she carefully manipulates each digit to bring it to her lips.
The warmth of it fills her mouth and reminds her she exists, and as it travels down her system it brings her back to this base of reality.
"Thank you," she says, and she is thankful. Her body had felt dangerously stranger to her until the caretaker brought the tea.
"What did you see?" asks the caretaker. 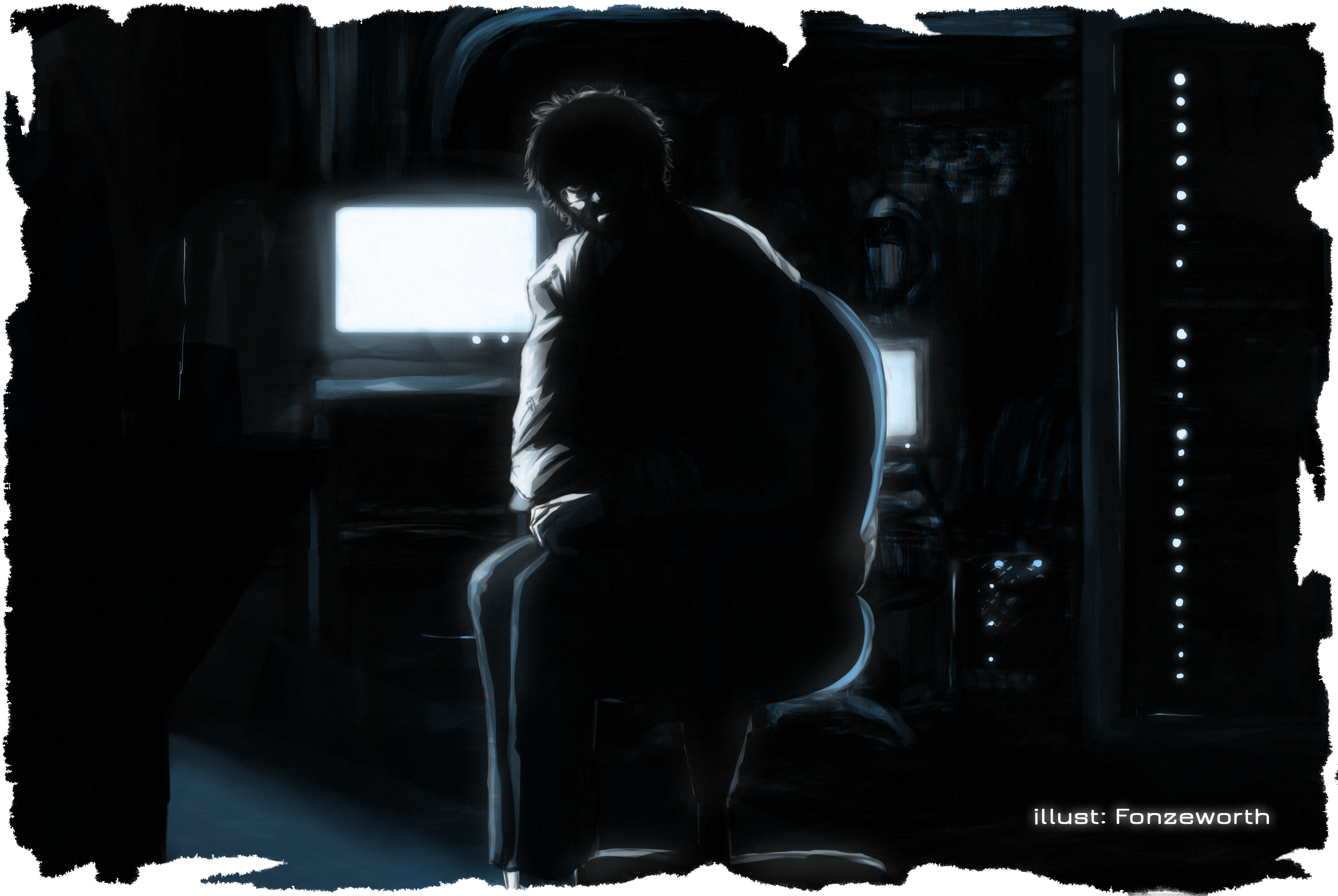 "I saw myself," answers the visitor, and brings her legs closer to her chest. The caretaker is sitting in a chair in front of her as she remains on the floor, next to the large terminal. The only light in the room is the soft moonlight from the window and the various gauges and blinking LEDs that indicate the terminal's function.
"That is you, and it is not you, too. It is you in your purest form. It is a level of self no one is fit to experience. Do you understand?"
"I understand."
"If I had not discovered you, you too would have become irretrievably lost. You would have existed ad infinitum in that space."
"What kind of place is it?" asks the visitor, but she regrets it immediately. Perhaps she is better off not knowing.
"It is the true nature of the Net itself. It is a place where you exist alone, but simultaneously with others. A place with no sound, no atmosphere, no life. And yet all life itself can be found there." The visitor finishes her tea and the caretaker returns to the kitchen to clean the cup. He places it exactly where he found it, maintaining the appearance of the shack to perfection. He takes his seat back in his chair and then stares straight into her eyes.
"You must leave this place. There's nothing for you here. Forget everything you saw. It is for the best that you do. Live your life as if the last few days you've spent here were a dream. It will be better for the both of us."
The visitor takes this to heart. Her pride as an investigator tries to overtake her innate sense of morality, they struggle, but her morality surpasses the former and out comes the response: "I will." In this simple confirmation of instruction, she has already begun the process of forgetting. The things that occurred here were fiction, and she was participant of that fiction.
She cannot tell the truth about things that are untrue. Something deep within her tells her this, and she knows it to be true.
The next day the visitor left, never to be seen again.