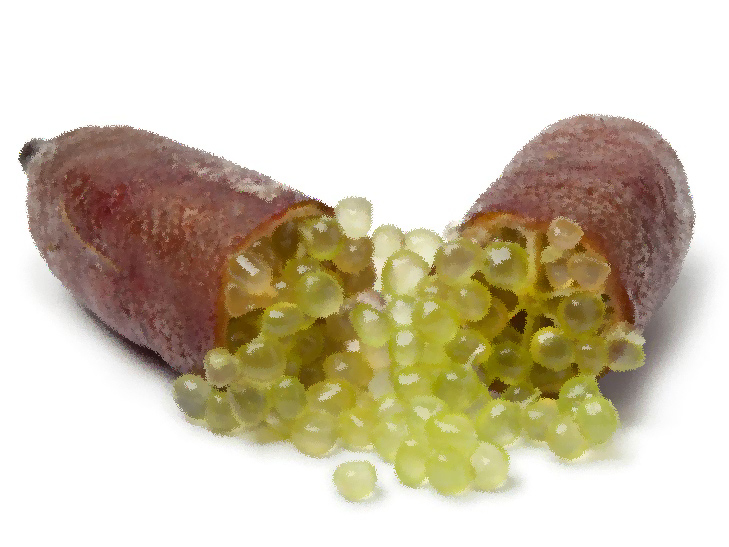 No, not really. Enter the Australian finger lime: a citrus fruit with a tough skin that, when harvested, makes it look like a sausage. The fruit first made its rounds in the scientific community after long-lost Dr. Matsuyama made a compelling return to the science world with a new discovery that could save citrus crops all over the world.

It was over ten years ago that Dr. Matsuyama debuted the first genetically enhanced apple, supposedly with higher nutritional value. However, its taste was poor, and it later came out that a side effect of the apple's enhancement was an acute case of overdose in vitamin A which resulted in diffuse hair loss in nearly all test subjects. Dr. Matsuyama fled Japan shortly after.

Now, 15 years after his disappearance, Matsuyama has returned with a miracle food: the Australian finger lime.

In recent years American citrus farmers have been battling a disease called huanglongbing or HLB for short, a form of citrus greening that makes fruits inedible and kills the infected trees. According to the recent international meeting of scientists in Shanghai, Dr. Matsuyama has claimed that since taking cover from the public eye he has made the shocking discovery that the unusual citrus fruit, finger limes, contained a gene that renders it completely resistant to citrus greening. Since this discovery Dr. Matsuyama has worked with a private team of ex-Sanyo employees to determine the exact gene and extract it for use in other crops.

The image of the finger lime, however, caused an uproar on social media. Twitter users everywhere began sharing the image of the citrus sausage after one user erroneously called it the "citrus sausage." A joke turned wildfire, various users expressed distaste at such a creation, calling it an unholy merging of two directly opposed flavours. It took Australians informing those outside of Oceania what the sausage in question actually was, bringing lots of attention to what would otherwise be considered a scientist-only issue. For approximately 24 hours, the term "citrus sausage" reached the top of the trending list in a tidal wave of culinary disgust.

We tried to reach Dr. Matsuyama for comment, but were only returned with a link to buy citrus sausage T-shirts.